skip to main | skip to sidebar

Mandala above, Homage to Chagall, created for Mary by Paul Heussenstamm

May Palmyra Syria NOT Be Destroyed 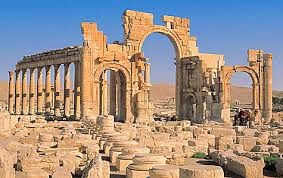 The world is raging with war, killings, destroyed lives....still.  We've barely left the most horrible century for human murder, the twentieth, and there is no sign that it will let up.
It is end of May 2015 and there are more refugees and displaced persons now than at the end of World War II.
Boat loads of people escaping turmoil, failed states, chaos, murder, hunger, running to find a better life.  As Thomas Friedman of the N.Y. Times put it, they're escaping dis-order, seeking order.  Most likely it will only get worse, as climate change and income inequality become more prevalent.  In California and large swaths of the western U.S., drought is taking its toll on the lives of the poorest.  Large industrial orchards suck groundwater deeply leaving poorer more shallow wells to run dry.  Towns in central California have had no running water for months now.

But I continue to Trust.  Continue to Accept that the arc of human destiny can only improve.  Continue to Understand that this movement for the better is a slow, almost imperceptible process.  I am hopeful...still.

So I share a long quote from Amos Oz, the Israeli author, taken from an interview in the Jewish Journal (http://www.jewishjournal.com/) May 15 - 21, 2015.  Oz is interviewed by Rob Eshman, Editor-in-Chief for the Jewish Journal and they're discussing the prospect of peace in the middle east and the necessity for wearing the uniform of armies:

Oz states: "Look, you have to live in this complicated world.  You have to be clearing the sewage from time to time, clean a blockage in the sewage.  And you do that, and you do that as well as you can do.  But there is not much pride in coming out of the sewage, stinking all over - you take a quick shower, you don't walk in the street claiming, "I just cleaned the sewage."  No, I don't feel any pride in wearing uniforms.  I find necessity.  I don't find...any beauty in bars on the windows and locks on the doors.  But they are a necessity."

I don't have a solution for this tangled, complicated, messy dis-ordered world we live in.
I don't know how to stop ISIS and other fanatics from killing, destroying, leaving terror and horror.

But I wanted to share Amos Oz' words because they echo how I feel.

Posted by eldermuse.net at 3:46 PM No comments:

Mary will facilitate a new group, Your Body's Grace. Join us weekly to discuss taking ownership of your body as a vehicle to better know the Divine, the Divine Mystery. To help you feel your body's needs. To discuss ideas to meet those needs.

To see the flyer for this group, please copy and paste the following link: http://www.eldermuse.net/your_bodys_grace_flier.pdf
Nutrition is the miracle of taking in food, nutrients which transform to become our corporeal selves. Our nutritional intake literally affects each and every cell in our body, each cellular process including the process of creating our emotions, feelings, thoughts, dreams, fears. What we eat literally shapes our bodies and our minds.

I've posed some things for us to consider as we seek to find practical, do-able solutions to nurturing ourselves, literally with food, as well as nurturing our souls, our hearts, our best humanity. The need is very real in our world which rapidly creates physical as well as emotional disease.

I wish to teach you, help you lock in the concept of INTENTION. Gain CLARITY about your intention. Plan to CREATE/MANIFEST your intention. How do you already do this? (CREATION/MANIFESTATION). When have you successfully created? What keeps blocking you from what you now want? What do you need to know? From me, from the world, from yourself? What is your worst fear? What is the primary UNTRUTH you tell yourself?

"Faith is taking the first step, even when you don't see the whole staircase." Martin Luther King, Jr.

"Take your life in your own hands and what happens? A terrible thing: No one to blame." Erica Jong

"Vison without action is illusion." annonymous

eldermuse.net will be facilitating a new Women's Spirituality Group in Ventura, CA; each Tuesday from 7 to 9 PM. Please see the Flyer for this Women's Group: (copy and paste the following link): http://www.eldermuse.net/Womens_Spirituality_Group_Flyer.pdf ...... The Weekly Group Questions will be posted here: Week 1: (a)Name 2 things which create passion for your heart and soul. (b)Describe the first time you felt the presence of The Divine in your life. Week 2: What to you is integrity and how do you evidence it in your life? Week 3: What do you do to center yourself spiritually? Week 4: (a)Name 2 things you love/appreciate about yourself. (b) Do you love/accept yourself exactly as you are? (c) Do you love the world exactly as it is? Weeks 5,6,7 No questions posed, as Mary was gone. Karen facilitated and shared a video on Forgiveness. Week 8: What do you still have to forgive yourself for? Week 9: How do you display the Divine in your home/space? Week 10: What has caused you to know humility? Week 11: Who has most influenced your Spiritual growth? Week 12:What (if anything) has a special meaning to you at this time of year? Week 13: What do you do to allow yourself to be creative? AND When we get thrown "off course", what do you do to get back to LOVE? Week 14: When in your life have you KNOWN exactly what you MUST do? AND What is your definition of ENLIGHTENMENT? AND What triggers your evolution of human consciousness? Week 15:How do you cultivate gratitude within yourself? AND Do you put aside time daily to be with the Divine? Week 16: What does negativity mean to you, mean in/for your life? Week 17: What are your Truths? Week 18: Discuss a DEFINING MOMENT in your life which touched your heart and soul.

Solitude
The not happening was so sudden
that I stayed there forever,
without knowing...as if I were lost in night.
Not being was like that,
and I stayed that way forever.

Afterwards, I asked the others,
the women, the men,
what they were doing so confidently
and how they learned how to live.
They did not actually answer,
They went on dancing and living....

eldermuse.net
Eldermuse.net is a Woman's Voice for Love and Reason. Mary Farkas wishes to touch your heart with Love, your Mind with Reason, your Soul with self compassion. She wishes you to Impact the World with Good.

To learn more about Mary Farkas, please visit my website: http://eldermuse.net.
You can find me on Facebook: eldermuse net